The people that know me are well aware that I appreciate and support all kinds of music. Being a composer and musician myself automatically directs me toward the sounds that appeal to me--and my tastes are very eclectic. Being a child of the 50s and 60s, I grew up with rock 'n' roll, but I also had a love of movie soundtrack music.

The Big Bang in music for me, though, happened when I went to college in the early 70s. There I was exposed to different kinds of music that, up to that point, I was not accustomed to. I had started getting into jazz during high school with the advent of jazz fusion (Mahavishnu Orchestra, Weather Report, Return to Forever, etc.), and once I was in college I explored the genre further. I became deeply entrenched in what we now call progressive rock, and I especially was attracted to the more experimental, underground acts (Soft Machine, Gentle Giant, Hatfield and the North, Henry Cow) along with the more popular, commercial ones (Jethro Tull, Yes, Pink Floyd). Those years solidified my love of the unusual. To this day I seek out not the current Flavor of the Month that appears on "Saturday Night Live" and wins Grammies, but rather the hard-working, under-the-radar, extremely talented artists that attempt something new and exciting within the Progressive, jazz, or experimental genres.

The first one comprises just about everything that can be found on the Moonjune label. Run by Leonardo Pavkovic out of New York, the label releases mostly world music in progressive and jazz veins; for example, the great jazz fusion guitarist Allan Holdsworth is on Moonjune, as well as the Soft Machine Legacy and other members from the so-called "Canterbury" school of prog.

But the most impressive stuff on Leonardo's brand is the music coming out of Indonesia. That country has become a hot bed of tremendous jazz, jazz-fusion, and prog rock.

I was recently asked to write liner notes to the new album by the jazz fusion band, simakDialog. Their sixth CD, The Sixth Story, will be released by Moonjune very soon, and the band is embarking on their first U.S. tour at the end of August/early September 2013. They'll be playing dates on the East Coast (Prog Day in Chapel Hill, North Carolina, and dates in New York and elsewhere). Led by Riza Arshad on keyboards, the band might be described as "Return to Forever meets East Asia." The music is extremely complex but very accessible. Here are some YouTube samplings of their stuff:
simakDialog Live in Nepal
Kata Hari 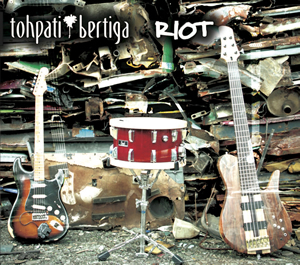 The talented guitarist of simakDialog is Tohpati, who is rapidly becoming the Jimi Hendrix of Indonesia. He has his own albums, including the above pictured power trio, and a more cultural fusion experiment called Tohpati Ethnomission. This guy is unbelievably good.
Tohpati Bertiga
Tohpati Ethnomission 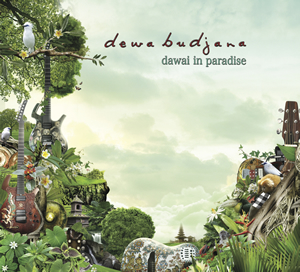 Finally, there's the brilliant Dewa Budjana, another virtuoso guitarist, who gives us a world music that transports the listener to foreign and exotic places.
Dewa Budjana Live
Dewa Budjana and Tohpati together

There are, of course, other Indonesian acts besides these, and you can find most of them at Moonjune. In fact, the label's online store is having a big sale. Check out these great acts! 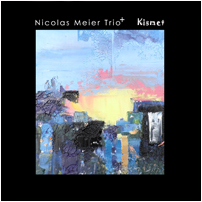 The second discovery I very recently made was also through Leonardo, who recommended the works of guitarist Nicolas Meier. He hails from Switzerland but resides in England. Another virtuoso who experiments with world music influences, Meier has recorded many albums of his own, as well as spin-off side projects with various jazz and pop musicians. I particularly like Eclectica, which delivers a more traditional jazz sound, specially augmented by the exquisite Lizzie Ball on violin and vocals (fantastic!). Meier's first big release was an album of Vivaldi's "Four Seasons" performed on electric and acoustic guitars--superb. He even does heavy metal in band called seven7, for those who like that stuff.
Nicolas Meier
Nicolas Meier Trio
Eclectica 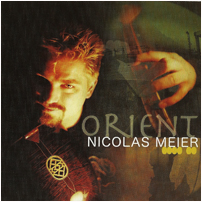 So, with that, enjoy your summer. Keep your ears wax-free and your mind open... buy some new music and explore new worlds. You won't regret it.
Posted by Raymond Benson at 3:49 PM 6 comments:

A Vote for American Political Films

In honor of Independence Day, I thought I'd say something about American Political Films, of which there are quite a number, and many of them are pretty good!

My partner-in-crime at Dann & Raymond's Movie Club, Dann Gire (film critic of Chicago's Daily Herald) did a show on political films during our first season, back in 2007. We picked our favorite fifteen political films, listed chronologically below. Some of the runners-up (in no particular order) were: "Mr. Deeds Goes to Town," "Young Mr. Lincoln," "Gabriel Over the White House," "Sullivan's Travels," "Citizen Kane" (really more of a character study than a political film), "Yankee Doodle Dandy" (really more of a musical than a political film), "State of the Union," "Wilson," "Henry V," "On the Beach," "A Face in the Crowd," "Fail-Safe," "One, Two, Three," "Advise and Consent," "Seven Days in May," "The Russians Are Coming, the Russians Are Coming," "The Parallax View," "The Front," "Missing," "Red Dawn," "Born on the 4th of July," "The Milagro Beanfield War," "Mississippi Burning," "Talk Radio," "Nixon," "Primary Colors," "Dave," "The American President," "Bulworth," "Bob Roberts," "Malcolm X," "Munich," "The Constant Gardener," "Thank You for Smoking," and many more.

1.  "The Birth of a Nation" (1915) directed by D. W. Griffith; shamefully racist and offensive by today's standards, this was the first blockbuster ever and pioneered many new cinematic techniques. Its importance in cinema history can't be overlooked. 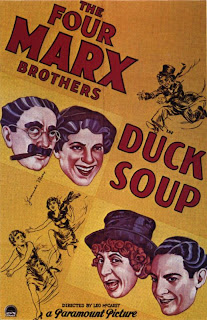 2.  "Duck Soup" (1933) directed by Leo McCarey; arguably the best film the Marx Brothers ever made, but curiously it didn't do well on release--audiences during the Great Depression were in no mood for political satire; but today it's one of the funniest films ever made... and it has a lot to say about politics, too! 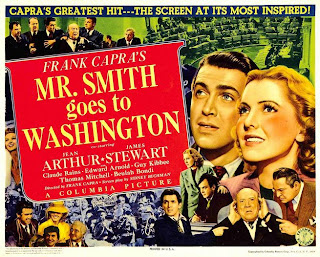 3.  "Mr. Smith Goes to Washington" (1939) directed by Frank Capra; it could be the ultimate political film, and for my money, it contains James Stewart's best performance.

4.  "The Great Dictator" (1940) directed by Charles Chaplin; Chaplin said later that he never would have made the film had he known about the horrors that Hitler had covertly unleashed (the film was made in 1938-39); nevertheless, Chaplin delivers a brilliant performance in two roles, and we also get to hear him speak for the first time.

5.  "All the King's Men" (1949) directed by Robert Rossen; another one for the history books, this was a scathing look at corruption in politics, starring Broderick Crawford in an Oscar-winning turn. 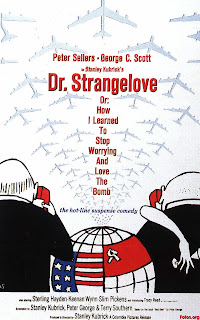 6.  "Dr. Strangelove" (1964) directed by Stanley Kubrick; arguably the best black comedy ever made; what could be more audacious than a comedy about nuclear war, released less than two years after the Cuban Missile Crisis?  Peter Sellers' finest moment.

7.  "The Candidate" (1972) directed by Michael Ritchie; Robert Redford presents one of his best performances as a guy who is talked into running for president without a clue of how he's going to do it.  Terrific stuff.

8.  "Nashville" (1975) directed by Robert Altman; yes, this is a *very* political film; the country and western music scene in Nashville served as a metaphor for American politics; and there's that assassination at the end that punched us in the gut...

9.  "All the President's Men" (1976) directed by Alan J. Pakula; in many ways, it's a detective story, clearly following Woodward and Bernstein's path of investigative reporting into the Watergate scandal. Brilliantly written and acted.

10.  "Reds" (1981) directed by Warren Beatty; an epic about the beginning of the Communist Party in America, featuring an all-star cast headed by Beatty, Diane Keaton, and Jack Nicholson; long but never boring.

11.  "The Killing Fields" (1948) directed by Roland Joffe; heartbreaking and horrific, and also a terrific buddy story about a journalist and his photographer in Cambodia during the Khmer Rouge.

12.  "Cry Freedom" (1987) directed by Richard Attenborough; Kevin Kline may have been the star, but it's Denzel Washington's movie--he plays anti-Apartheid activist Steven Biko--and he should have had more screen time!

13.  "JFK" (1991) directed by Oliver Stone; another of the filmmaker's "activist cinema" entries, it's controversial to boot, but also fascinating, brilliantly shot and edited, and compelling; it throws in every conspiracy theory and asks the audience to figure it out.

14.  "Wag the Dog" (1997) directed by Barry Levinson; need a war to help political polls? No problem!--get Hollywood to create one. Dustin Hoffman shines as a producer who agrees to do that very thing for a candidate's troubleshooter, Robert De Niro.

15.  "Good Night, and Good Luck" (2005) directed by George Clooney; beautifully shot in black and white, the story of taking down Joe McCarthy could be no other way; it perfectly captures the period and paranoia.

So, if you get tired of hot dogs, marching bands, and fireworks this weekend, grab one of these flicks and watch it!
Posted by Raymond Benson at 4:21 PM 6 comments: