My review of Paramount Presents' new Blu-ray release of Robert Redford's "ORDINARY PEOPLE" is up at Cinema Retro.

Posted by Raymond Benson at 8:29 AM No comments:

My review of Warner Archive's new Blu-ray release of William A. Wellman's 1937 "A STAR IS BORN" is up at Cinema Retro.

Posted by Raymond Benson at 8:34 AM No comments:

My review of Cohen Media Group's new Blu-ray release of Joan Micklin Silver's "HESTER STREET" is up at Cinema Retro.

Posted by Raymond Benson at 8:44 AM No comments:

Review of Criterion's Blu-ray of Scorsese's "The Last Waltz"

My review of The Criterion Collection's new Blu-ray/4K Ultra release of Martin Scorsese's THE LAST WALTZ is up at Cinema Retro.

Posted by Raymond Benson at 8:54 AM No comments:

A Tribute to the Band Called... STAR PEOPLE

ALL HAIL THE… STAR PEOPLE 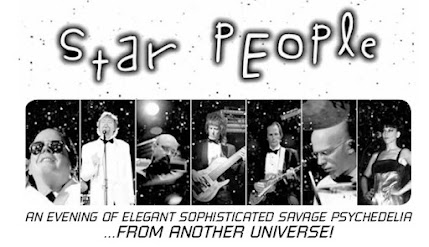 (Links to FREE MUSIC are at the end of this piece)

On November 8, 2000, I attended a concert at famed music club Martyr’s in Chicago, Illinois, to see the headliner, the fabulous OZRIC TENTACLES. While I loved the OZRIC set and I still today cite them as one of my favorite bands, I walked away that night more impressed with—and in possession of purchased CDs by—the opening act, a band I’d never heard of from the New York area.

They were called STAR PEOPLE.

I don’t normally wax poetic about music on my blog, but with the release of a long “lost” third album by the band online, plus new material recorded in recent years, I decided to pay a little tribute here to STAR PEOPLE, because I’m sure most folks have also never heard of them. They deserve a greater legacy than they received, and I’d like to turn you on to this talented entity.

STAR PEOPLE was a short-lived outfit that began around 1997 and broke up in 2001. They released two CDs and toured (over 100 gigs), usually opening for OZRIC TENTACLES or DREAM THEATER. They had a unique and unusual stage show attached to their music—it was part Las Vegas Rat Pack Martini-Swilling Tuxedo-Clad schmaltz, and part science fiction psychedelic progressive rock. The conceit was that the members of the band were from outer space, certainly not the first rock group to make the claim (MAGMA comes to mind). But the six men in the band wore tuxedos, and the one woman wore a red nightclub dress, and they might have appeared to be a lounge act in your Vegas hotel. But the music took one on an “experience” of tongue-in-cheek, wink-wink, funky riffs in which front man Bill “The Teacher” Olland spoke words of wisdom and pseudo-cosmic profundities… to beautiful ballads sung by either the gorgeous violinist, Lorenza “Star Girl” Ponce, or velvety-voice crooner Paul “Golden Boy” Gifford… to flat-out virtuoso instrumental prog rock that rivaled some of the big names in the genre (Yes, Gentle Giant, ELP, Genesis, King Crimson, Dream Theater). A STAR PEOPLE show made you laugh, dance, and drop your jaw with admiration.

The band was mostly the brainchild of bassist/harmonica player Randy “The Ambassador” Pratt, however his mates from previous bands and school years certainly contributed to the conception—not only Olland and Gifford, but Robert “The Captain” Dean (guitar), Scott “The Doctor” Treiblitz (keyboards), and Phil “The Helmsman” Weiss (drums). (Yes, they all had those nicknames as their stage personas.)

It was Ponce, originally a guest musician on the band’s first album before becoming a full member on the second, who suggested that they learn some “dance moves” to make the set more of a stage extravaganza—and they did. Ponce is perhaps best known for her work as a violinist and vocalist with Jon Bon Jovi, Sheryl Crow, John Tesh, and her own solo projects. Pratt has played with everyone, it seems, most recently with the reformed CACTUS. Every member, though, brought experience and ability to the lineup.

As evidenced by my own response to their show, STAR PEOPLE could bring down the house and upstage the headliner. Pratt says that Ponce, an already experienced road warrior, stated after a set: “I’ve never seen an opening act get a response like this!”

Pratt blames the demise of the band on “unscrupulous management, personal tragedies, and career choices.” It’s a shame, because there was a third album, Black Tie and Tales, in the works that remained in the vault… until now.

Via his own Hyperspace Records label and website, Pratt has made available for streaming FOR FREE the first two albums (in case you weren’t lucky enough to purchase the physical CDs back in the day), the brand new third album (recorded 2001), and new bonus material recorded by most of the original band members plus guest stars (dated 2021).

Do yourself a favor and check them out at Hyperspace Records. Explore the site for links to the three albums (see “Releases” on the menu at the top). There’s a comic book (The Legend of Star People) that is a sci-fi “history” of the band (also see “Releases” or “Blog”), and for a sense of their stage shows, be sure to see all three vintage videos (see “Videos”).

Furthermore, here are two YouTube links to a show from 2000 at House of Blues in New Orleans, which sadly was shot too far away from the stage, but you’ll get the gist:  Part One and Part Two

Hats off to STAR PEOPLE. This fan thanks you for your short visit to our planet. See you in the next world. 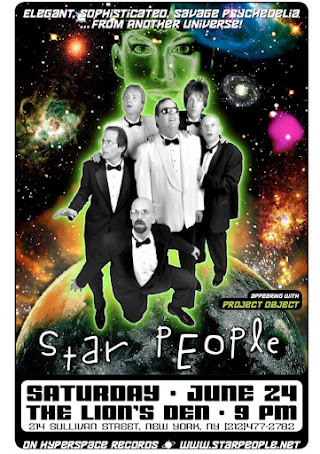 Posted by Raymond Benson at 8:08 AM No comments: