In Praise of Stanley Kubrick

(NOTE: This blog was originally written and published on my original blogging site on February 4, 2013.)

Hello and welcome to Blog Benson. This is my second post. I deleted the first one. I'm experimenting. I want to get comfortable with this blogging thing.

So for this attempt I thought I'd play it safe and simply talk off the cuff about a guy who was a huge influence on me, and still is. Film director Stanley Kubrick quite simply changed my life. In late 1968 (or possibly January 1969), I saw "2001: A Space Odyssey" with my father. I was thirteen-years-old at the time. I couldn't believe what I saw on that 70mm screen. Tomes have been written about this landmark film and how influential it is in the history of cinema, but for me, living in the small West Texas town of Odessa, it was a revelation. It illustrated to me what a "director" does. I suddenly understood what auteur theory was and I'd never heard the term. 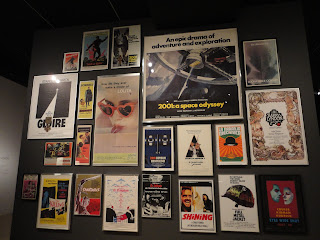 Kubrick's films were never "easy." In fact, most of them require more than one viewing to fully appreciate. They all have hidden meanings, deeper levels of subtext, and room for interpretation. He liked ambiguity. He wanted his audiences to think, to question, and to argue. He wanted to titillate and challenge the viewer with existential subjects that examined the human condition and its place in the universe. Kubrick also liked to make intelligent audiences laugh. His humor was blacker than just about anyone in the motion picture business. ("Dr. Strangelove" anyone?)

The filmmaker didn't make many movies. Only thirteen. Eleven of them could be considered classics, and at least six or seven of them are now called "masterpieces." The Stanley Kubrick Exhibition, currently on display at the Los Angeles County Museum of Art through June 2013, demonstrates how Kubrick's perfection in craftsmanship elevated his pictures from the norm. He was always striving for a better shot, a better performance, and a better product. I encourage anyone in the LA vicinity to pay a visit. It's a remarkable collection of Kubrick's "stuff"--props, scripts, costumes, cameras, notebooks, photos--all of which sheds a little light on the creative mind of a genius.

I've always admired artists who buck the system and do it "their" way. Kubrick, who purposefully developed a personalized mystique around himself, had an unprecedented deal with his studio, Warner Brothers. He could make any movie he wanted, with whatever budget he wanted, and he had final cut to boot. He didn't have to show the executives a frame of film until the picture was completed. Then, when most directors sit back and wait to see how it does at the box office, Kubrick had a hand in the marketing of his pictures, determining what theaters they should play in and how the ads should look. He created a film the way a writer pens a novel. He was always the sole author of his films, despite working with teams of extremely talented craftsmen and actors.

My family and I were fortunate to attend the opening night gala of LACMA's exhibition in October 2012. While I already personally knew members of the Kubrick family, I was privileged to meet several key individuals associated with the man's oeuvre. For me, the most exciting moment was shaking hands with Daniel Richter. He was the actor who played "Moonwatcher," the man-ape in "2001: A Space Odyssey" that threw the bone up in the air--an ingredient of what is arguably cinema's most famous match cut 2001 Match Cut. That short, iconic sequence represents what Kubrick was saying in all his films--that man does have the ability to reach for the stars... as long as he doesn't screw it up.

I still live by that adage.
Posted by Raymond Benson at 4:30 PM